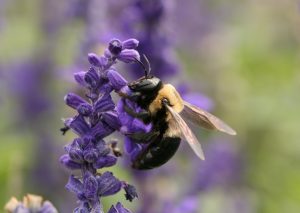 Pollinators are declining worldwide, threatening the world’s food supply.  The International Union for Conservation of Nature indicates that 16.5 percent of vertebrate pollinators (such as bats) are threatened with global extinction.  There are no global assessments of insect pollinators because of difficulty of gathering data but regional and national assessments indicate high levels of threat for some bees and butterflies and decline in numbers of other species.

Why are pollinators important?

Pollinators carry pollen from the male part of a flower to the female part, thus creating fertile seed which can produce plants for the next generation.   One estimate is that one out of three bites we eat is due directly or indirectly to this action by pollinators.  For example most of the fruits and vegetables we eat depend upon pollinators, as well as plants for fiber and those from which we derive medicine. Even meat, especially beef, and milk products are indirectly dependent on pollinators in that forage crops such as clover and alfalfa depend upon pollinators to produce seed. 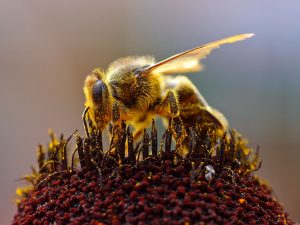 A lot of pollination is performed by honey bees, due to beekeepers transporting thousands of hives from one crop to another.  Honey bees are not native to the U.S. but were brought here by early European settlers.   In addition to honeybees, there are thousands of native pollinators out there busy collecting nectar and pollen and in the process doing the job of carrying pollen from one flower to the next.   Pollinators include insects, such as butterflies, native bees, beetles and flies, birds such as hummingbirds and mammals such as bats.

Why are native plants important for pollinators? 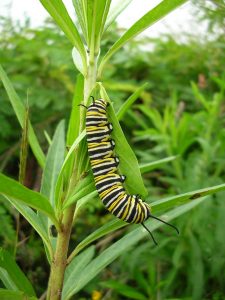 Flowers come in all sorts of arrangements and some flowers need a specific type of insect or animal to pollinate them.  For example, native bees come with different lengths of tongues.  Who would have thought of it?  A short tongue bee can access an open face flower like a sunflower.  A long tongue bee also can access sunflowers but is more likely to go to tubular flower like bottle gentian which a bee with a short tongue cannot access.  So if there are no long tongue bees around, tubular flowers may not become pollinated.

In addition, caterpillars of some butterflies only will feed on a specific type of plants.  For example, monarch caterpillars feed only on milkweeds so if there are no milkweeds, the monarch female has no appropriate place to lay her eggs, so no new generation of monarch butterflies to provide pollination for many flowers.  A diversity of plants is necessary for a diversity of pollinators.

Native habitats, especially, provide a wide diversity of plants and thus habitat for a wide range of pollinators.

What are the causes of pollinator decline? 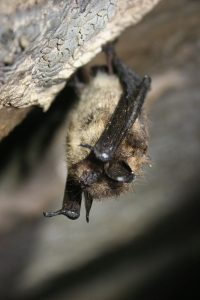 The causes of decline are many.  One is habitat loss.  In Illinois with vast amounts of land taken up with corn, soybeans and development, there are fewer and fewer acres of habitat for insect species, meaning fewer plant communities for shelter, as well as lack of specific species of plants some pollinators need for food and reproduction   Other causes of pollinator decline are use of pesticides both in managed bee colonies and in agriculture, home and garden. In addition, alien species of plants are invading natural communities, displacing native plants and thus the homes and food for pollinators. Alien diseases and parasites are an increasing problem both for honey bees and native species of insects.  And, as the climate changes, species unable to adapt to new weather conditions may decline or become extinct.

So what can we do?

Plant more native plants.  Plants like hostas and daylilies are of minimal use to pollinators.  Instead of hostas, plant calico aster, Solomon’s seal, wild geranium.  Instead of daylily plant pale purple coneflower, rattlesnake master, and smooth aster (from monarchgard.com)  According to Illinois Audubon, scientists say 1.8 billion more stems of milkweed plants may be needed to sustain the monarch population, so plant milkweeds.  Buy native plants at the Native Plant Society annual sale at the Illinois Fairgrounds Commodity Pavilion across from the grandstand on Saturday May 11, 2019 from 9 to1 or the Lincoln Memorial Gardens Prairie Plant Sale on May 11 from 9-1 and Sunday May 12 from 1-4.   And you can help plant new plants in the ALUUC prairie for added diversity (See Jim Curran, Tony Gambiani, or Virginia Forrer).