Thanks to everyone who stopped by the ALUUC table at PrideFest to visit us and request information about our congregation.

ALUUC is a Welcoming Congregation that has participated in every PrideFest here in Springfield.  For 65 years, ALUUC has supported vulnerable communities and diversity.  We have long been a public advocate for Marriage Equality and for promoting the inherent worth & dignity of the LGBTQQA community in Central Illinois.

As our banner at PrideFest proclaimed:  We believe that Love is Love / Black Lives Matter / Climate Change is Real / No Human Being is Illegal / All Genders are Whole, Holy and Good / Women have Agency over their Bodies. 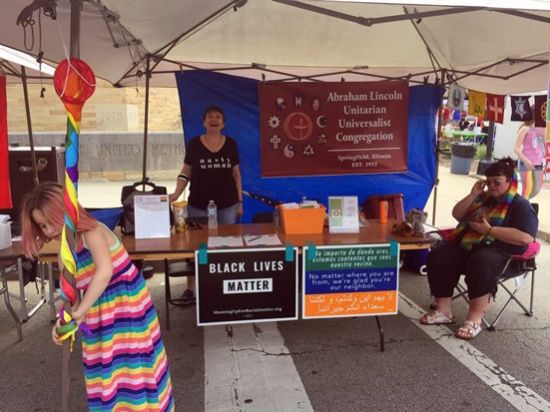 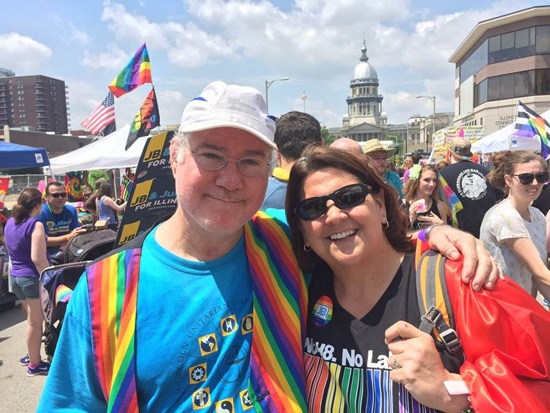 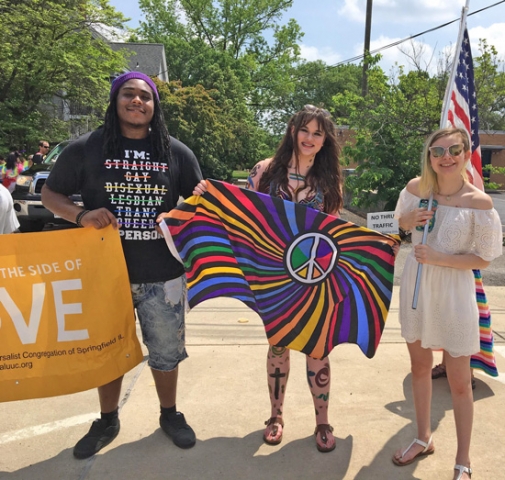 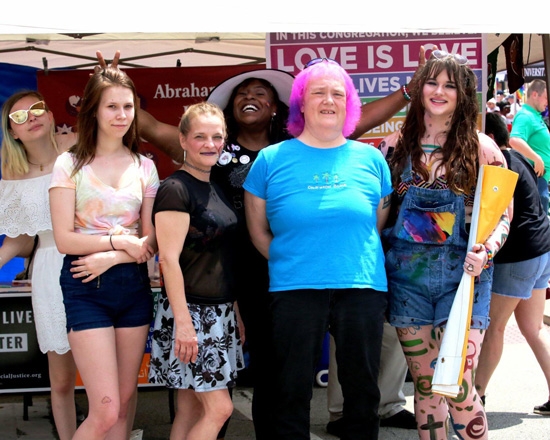 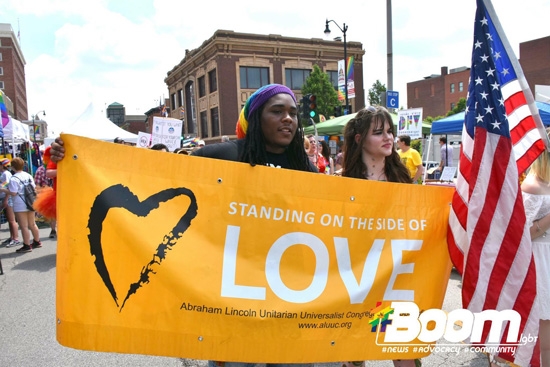 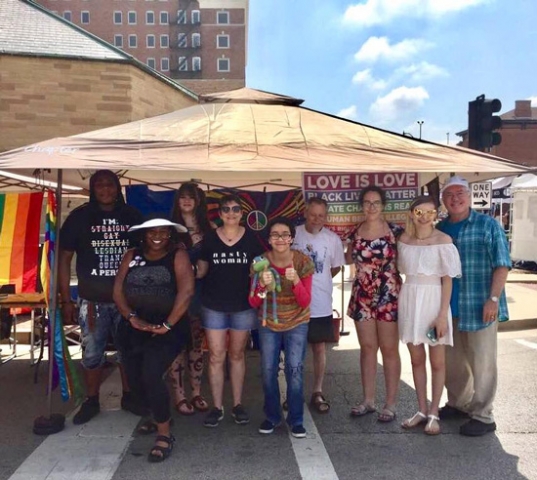 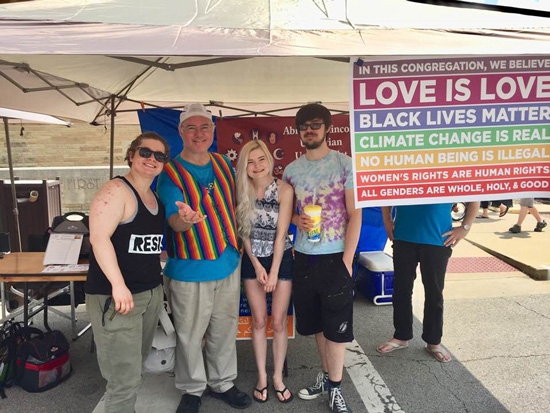 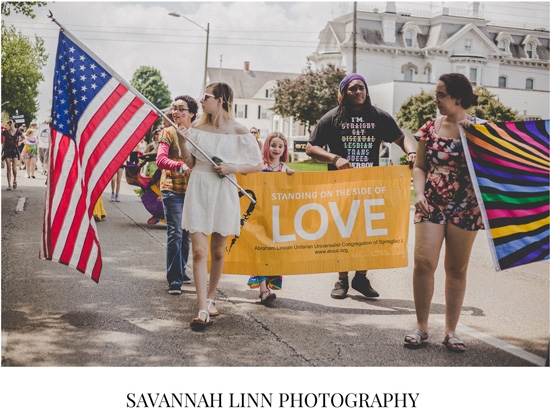 Excerpted from an article published on April 30th, 2018 by NPR Illinois at  http://nprillinois.org/post/minister-takes-his-stand-gun-debate

The Rev. Martin Woulfe of Springfield has spoken from the pulpit about the need for what he calls saner gun control measures.

His sermons at the Abraham Lincoln Unitarian Universalist Congregation preaching gun safety have gone back more than a decade. And he’s talked about gun violence as a social justice issue.

“It just seems that if you’re going to be a shooting enthusiast, you don’t really need an assault weapon,” he said. “And I think that it is a military weapon that properly belongs in the hands of a trained military person and is not designed to be a civilian weapon at all — that if someone seriously has concerns about guarding his or her castle that is not the weapon that a person ought to have at their disposal.”

What may be surprising is that Woulfe is a gun collector who shoots competitively with black powder weapons through the North-South Skirmish Association. The minister’s 17-gun collection includes modern and antique weapons. He’s got shotguns, handguns, rifles, carbines, a musket and a pistol.

Not every shooting enthusiast is a fan of Woulfe’s approach to guns.

But Woulfe says, “The notion of the militia is obsolete. I think, if we’re going to be honest, that waving the Second Amendment as permission for any individual to carry any type firearm at any time is a gross exaggeration and is contrary to the intent of  the authors of that document.”

Woulfe says something needs to be done in terms of gun control in this era of school shootings and mass murders.

“We wring our hands and we offer our hopes and prayers for the victims and their families, but we don’t do anything as far as curtailing the availability of certain weapons and certain accessories.

“I think it’s been demonstrated to horrible effect just how effective it is to upgrade a weapon which is supposed to be fired by single-trigger action into a semi-automatic weapon and a silencer. I cannot see any reason anyone outside of a James Bond movie would need a silencer.”

Excerpted from an article by Unitarian Universalist Advocacy Network of Illinois (UUANI) on November 1st, 2013 http://www.uuani.org/new-blog/2017/5/20/illinois-uus-march-for-marriage-equality

Rev. Khleber Van Zandt didn’t think he or anyone else from First Unitarian Church of Alton would make it to Springfield for the March for Marriage Equality on October 22. Then at church two days before the event, he was talking with a 71 year-old member of the congregation who was apologizing for being a little grumpy. The member commented that it had been an emotional time in their life. Rev. Van Zandt suggested that perhaps he had said something that had made the member upset. “No,” the member replied, “it’s because I’m this close to being considered equal to you. I’ve been down in the bottom of the closet for 71 years, and it’s finally time I came all the way out so I can marry the person I love.” Both Rev. Van Zandt and the member made it to the March, along with five other members from Alton.

Stories like this were the heart of the day as 300 UU’s from 23 congregations – from Carbondale to Stockton, from McHenry to Quincy – gathered in Springfield to march for marriage equality and launch the Unitarian Universalist Advocacy Network of Illinois (UUANI). Buses full of UU’s left from Chicago, Evanston, Palatine, Naperville, Rockford, Peoria, and Bloomington starting at 6 am, and met in Springfield, where we birthed UUANI with songs and stories, leadership elections and lunch, and a rally and march at the state Capitol.

About 100 of us gathered first at Abraham Lincoln UU Congregation in Springfield. Over a soup and sandwich lunch graciously provided by the Springfield congregation, we got to know UU’s from other congregations and share why we were there and what we hoped for. Also with us were 5 young adults from the Ujima homeless shelter in Chicago, one of whom serenaded us on the piano.

UU’s were out in force at the Capitol, with at least a dozen Standing on the Side of Love banners and scores of yellow shirts. Four members of the Unitarian Church of Hinsdale met with their state legislator and helped clear up some of her misconceptions about the marriage equality bill. Meanwhile, dozens of UU’s continue to make calls from phone banks at their home congregations.

Sharing stories, making connections, building relationships, growing spiritually, deepening our values, creating partnerships, and putting all that into action that makes a difference – that’s what UUANI is all about.

Note: Marriage equality was passed in Illinois on November 5, and the governor signed the legislation on November 20.

Read the full article at UUANI.org

The ALUUC received notice (August 31, 2010) that it has, once again, been recognized by
the Unitarian Universalist Association as an “Honor Congregation 2009-2010” for our full financial
support through contributions to the UUA Annual Program Fund. The letter-of-recognition
indicates that: “The UUA is keenly aware that the recent economic recession has posed
great challenges, and despite the challenges that your own congregation may have faced, your
congregation made the choice to contribute at the full requested level. This conveys a commitment
to fulfilling our mission of support to your convenental partners, the 1,050 member
congregations that bring our Unitarian Universalist principles and values out into the world.”

On behalf of the Abraham Lincoln Unitarian Universalist Congregation of Springfield, we wish to extend our full support to our neighbors and friends within the Islamic community. We further offer our best wishes to you as you celebrate the end of Ramadan.

As a religious community, we are appalled by recent events across the nation that have sought to marginalize your community and demonize your religious tradition.

We condemn any violence directed toward our Muslim brothers and sisters; we further condemn the desecration or destruction of the Quran. Finally, we support the effort currently under way to establish a new Islamic community center in New York City.

It is our great hope that unlimited acts of good faith planted by people from the many religious traditions will eventually supplant the finite seeds sown by others through ignorance and hatred.

We do not doubt that such a goal will require much effort but we are confident in our eventual shared success: to paraphrase the Rev. Theodore Parker, a 19th century Unitarian minister who toiled for social justice, “The arc of the universe is long, but it bends towards justice.” We share his faith, and we trust that by acting justly towards one another, with loving mercy, and walking together, we may all further the blessings of Creation.